How quietly it’s slipping by, unbelievably we’re nearly half way  through. And still,  not much has been said. Same as every year. Is it par for the course? Because child loss is one of the many things we don’t talk about – that we “bear” in stoic silence and secret, private agony. One would think, given the outpouring of concern for women and their babies in recent years that there would have been more said this month. Or maybe it’s because so much has already been said – maybe there is a collective compassion fatigue? Are we just exhausted from it? Because loss is exhausting, there’s no doubt about that. Or maybe there are just too many other things going on this month – it certainly has been busy in the media.

I do know that there are quiet rituals happening all over the country – and there is a beautiful and poignant dignity to this. I love that there are ways now to mark this huge loss, this oh so very common loss. There isn’t a woman alive that hasn’t either experienced the loss of a pregnancy or child or who doesn’t know one who has.

But we still don’t speak aloud about it as much as perhaps we could. Difficult as it is to utter those words, I know. To say “I lost a child” is to say the unbearable, to make concrete that which you don’t want to believe, to make real a living nightmare.

I remember years ago, speaking with a woman whose baby daughter was stillborn. She said that every time she thought of her she felt a contraction in her vagina. That utterly visceral grief was still there every day of course – years later. But how often did she feel able to speak about it? Not every day, as you can imagine. Her words will remain with me always.

People say it's unnatural to lose a child and yet one in four pregnancies ends in miscarriage. #miscarriage #SIDS #infantandpregnancylossawareness Click To Tweet

And so it’s not unnaturally infrequent. There are thousands of grieving parents in Ireland. We lose children through miscarriage, fatal foetal abnormalities, SIDS, and other tragedies (those links are to relevant support organisations) It happens. A lot.

And yet, as a client showed me recently – we have no word to describe that loss – to define it.

Acknowledgement is an important part of healing

It is only relatively recently (1995) we started to register still births in Ireland. So much unnecessary extra pain has been caused here by excluding babies and their parents from the normal funeral and burial rituals.

To say 'I lost a child' is to say the unbearable, to make concrete that which you don't want to believe, to make real a living nightmare. tweet to another grieving parent

In 1998 a Book of Remembrance was officially launched by Frances Fitzgerald TD in the College of Surgeons. It’s an unofficial register for babies lost through miscarriage. It is a beautiful, leather-bound Book. If you click on that link you will be guided through the process of making an entry. They will then post you out a certificate. A gorgeous idea. It’s something.

But again, we don’t have a word: 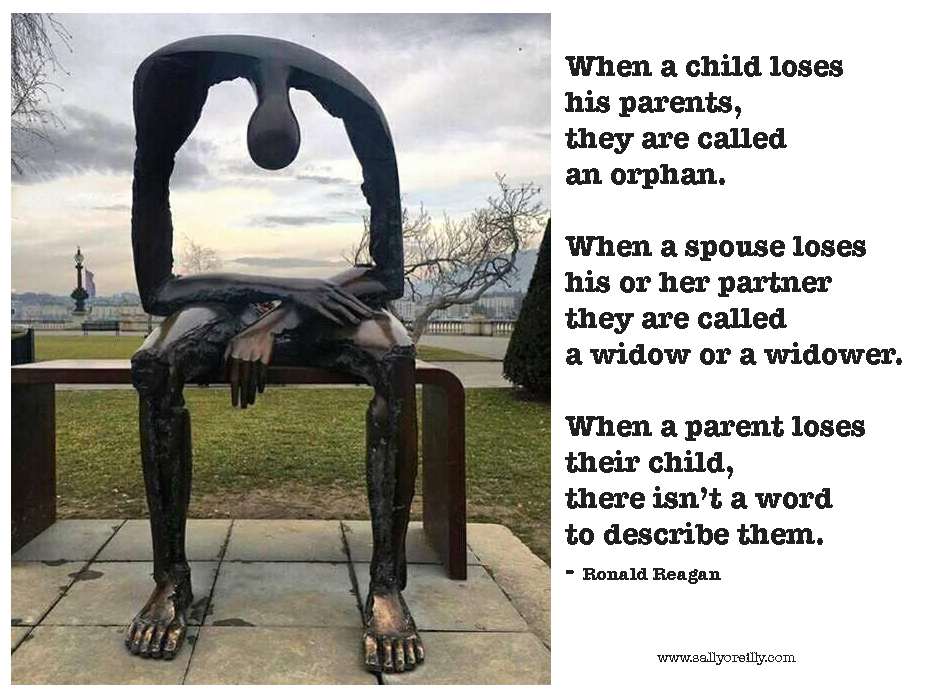 Is the lack of word in and of itself an indication of how little we acknowledge this as tragic, real and deserving of our undivided attention?

Or is it simply too much to bear?

Are there words in other languages and cultures I wonder? Do you know?

It’s just a word – but since I realised we don’t have one, it’s really bothered me.

PS: Since I wrote this post, a woman who read it said perhaps the best word is hiding in plain sight in the title. “Lost”. “Lost”, for a word.